You may have noticed I have been a bit absent lately. No special reason – just life.

I often think ‘I must blog about that’ and then the moment passes and a couple of days later I decide it’s too late.

Like the time I went out for lunch with 2 ‘exercise friends’ and had such a lovely time. It was the first time in a very long time I felt comfortable both with the people I was with and myself. I went home and looked in the mirror and said out loud ‘I actually like me!’ Thank you Leanne and Teresa – your friendship means more than you know.

Then there was the time I was excited because I had hit a new milestone weightwise. I was so excited, but that sneaky little voice kept creeping in and my next week was not so great. But I am still the same weight 🙂

And then there were the not so good times, when Lachlan was sick and I was really worried about him. He is better than he was, but will need to go see a specialist and it is all scarily like his big brother at the same age. It’s such a fine line. I know he exaggerates the pain and symptoms, but I also know he has them. The trick is where to believe and seek further help and where to ignore. I didn’t do so well 13 years ago (although there was also so many other major things happening in out lives at that time including my other son being in and out of hospital a week at a time for almost a year). But this time I want to get it right and at least this school is supportive!

And then of course there was yesterday. Lachie and I did the 3km fun run. It was hot and he really struggled (despite telling me that 3 kms was easy!). I had to keep slowing down for him and for a while I wasn’t sure he was going to finish, but he did and I was so proud of him. Our time of 35 minutes 56 seconds wasn’t too bad either. And we got a medal 😀 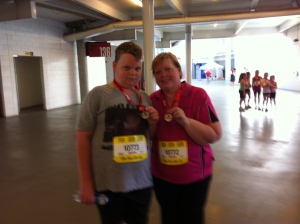 We had to leave early and couldn’t watch everyone else do the 10kms 😦 because we had to get home because some of my in-laws were coming for lunch for Brendan’s birthday. I hadn’t seen them since I started 12wbt but knowing them I was not expecting much of a comment although after 2 hours and no comment I was getting seriously irritated. They did however, comment on Ian and Brendan having lost weight (one has lost 5 kilos and is looking much better – the other nothing!) And they did notice that Lachie had grown. I should hope so! He has grown about 6 inches in the last couple of months and is now taller than me – damnit!! But apparently 28 kilos is not obvious! Eventually after I mentioned in passing my weekend away (the finale) coming up one of them said ‘Oh, have you lost weight?’ Duh!!!

So it’s been a couple of weeks of ups and down. Very busy weeks as well. In the next 3 weeks we are having the house painted and the floors polished and sanded. We have had the pool and decking removed and need to get that area sorted and have numerous small jobs such as replacement fans etc in the works. Pretty much everything in my house, on both floors, will need to be moved at least once! I was doing it anyway, but Gill arrives from the UK on December 10th (excited much?) and of course I want it all done before then. I just might do it too 🙂

Today Brendan and I went to IKEA and had a fabulous time searching out (and finding) the perfect table and chairs and TV stand for the lounge. We met Ian for lunch and had a great morning.

Then I realised I had this feeling in my stomach. Its hard to describe, and I felt like I just wanted to sit down and cry. It took me a while but I finally realised what it was. It’s fear. It is exactly the same feeling I had after John died. I am scared. And why? Ian told us at lunch he finally got a unit to rent today and he moves out on the 19th.

Don’t get me wrong – I am very pleased he is doing so – he really needs to get out on his own. He was already to go when John got sick, so he stayed and then stayed longer once his dad died. He has been looking for a while, with my blessing, but I suddenly realised how much I depend on him being there. He became my rock when John couldn’t be. I know I will cope just fine, and its not like he is going far, but still the feeling persists. I would never tell him, not that it would stop him going, and that’s just the way it should be.

I am so thankful that I have been doing 12wbt – not just for the weight loss but for the confidence it has given me. This is just one of those blips that is called life, but for today I am letting myself be sad and a little scared. Tomorrow I will once again pick myself up and be the ‘grown-up’ and work out the new dynamic in the house. Lucky Lachlan will be able to help out more in the house now. He will be thrilled – not 😉

1 thought on “Mountains and Valleys = Life!!”