I have heard before that the 2nd round of doing 12wbt often works more on the mind than the body and after the last few weeks, and especially the last few days, I believe it.

I think I have learnt more about myself in the last couple of weeks than I have for a long time. I thought I was beginning to get it all together (well, reasonably), then one photo wiped all I had achieved away and all those old feelings of self-loathing and insercurity started trying to push their way back in.

The first half of the week was a little so-so but then on Thursday I joined in the challenge of AMRAPS (as many rounds as possible) up 107 steps at Knapsack Bridge with 7 lovely ladies. I knew it was going to be hard work and hot, so I bravely made the decision to wear a sleeveless shirt (which for me is HUGE) and amazingly, didn’t die of embarrassment! The steps were steep and I knew my knees were going to be an issue but I was determined to do as much as I could. A couple of us climbed all the steps then walking a bush trail back around to the base of the steps. Then we all did some of the steps again. Those other ladies were amazing going up and down between 5 and 13 (sorry 12 and a half) times in the 30 minutes but I was happy with what I managed and will improve on it in 4 weeks when we do it again.

Friday I woke early, went for a walk and felt really good and decided to clean out our ‘if-you-don’t-know-where-to-put-it-dump-it-under-the-stairs’ room. It has a false wall in front of the window and I have always had to get someone else to clean that part out because although I could get into the area – just – I couldn’t move enough to do anything. It took me a while but it suddenly occured to me that I was in that space and working. Big smile (and a little show off to a firend who visited). I spent all day working but had an early night knowing the next day I was doing the 7km Bridge to Bridge walk, followed by the fitness test, followed by SSS.

So when I arrived at the meeting place at 6am I felt great, my hip was a little sore from the steps on Thursday but I felt confident and ‘slim’ (for me). The walk was great (I cut 10 minutes off my usual time), the fitness test went well and I managed most of the SSS, only adapting a couple of exercises as my hip was making its presence felt. We had a lovely breakfast/morning tea and I still felt great.

Then the photos were posted and immediately my whole attitude changed. I could feel my shoulders slumping and the tears welling up. From feeling pretty good and healthy, suddenly reality hit me in the face. 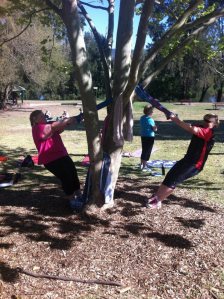 Now I know I have done really well and I have lost so many cms and kilos, but all I could see was that fat person wearing clothes she had no right to wear. I was horrified and embarrassed and a lot of other emotions I am not sure I could identify.

After about 30 minutes of feeling like this, I suddenly realised that I was letting myself fall back into the old mindset, I was looking for a way to go back to being the ‘old me’ where I was safe and didn’t have to challenge myself. I thought about the barrels from my last post and realised that I was trying to write ‘Shirley 2012’  on the barrel when I should have been writing ‘Shirley pre-2012’ and tossing it over board.

So I borrowed some of the photos, including the one I hated and posted them on FB. I still don’t like it but I am doing something about it. I am changing and I will not let one photo take away all that I have and will achieve.

In fact, it has made me more determined than ever and by finale I will be looking (and feeling) fabulous! 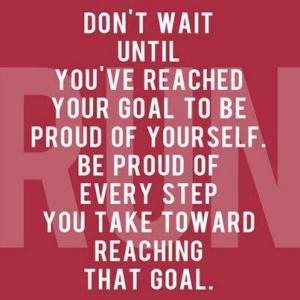